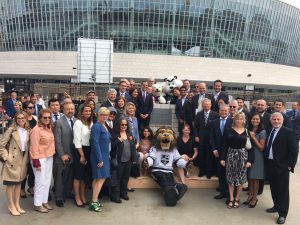 Los Angeles Mayor Eric Garcetti will be spending much of Independence Day en-route to Europe, where he will first join a “sister city” delegation in Berlin, and later head to Switzerland to support L.A.’s bid to host the Olympics.

Garcetti – fresh off his inauguration to a second term – will be traveling tonight to Berlin, Germany, where he will spend a couple days touring the city and marking the 50th anniversary of a sister city relationship between the two muncipalities.

His appearances in Berlin include a plaque unveiling, and the signing of an agreement that includes Los Angeles Cleantech Incubator, the Los Angeles Department of Water and Power and their German counterparts.

Garcetti will spend Thursday through Sunday out of the limelight. No public events are scheduled on those days.

Garcetti will then travel to Lausanne, Switzerland on Monday to take part in activities supporting L.A.’s effort to secure the 2024 Olympic and Paralympic Games.

Garcetti will returning to Los Angeles next Wednesday.